1985 - 1989 Trailblazing Tomorrow | The Adaptation of Excellence 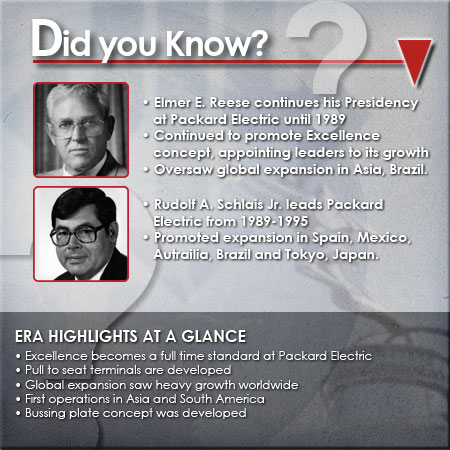 In 1985, Packard President Elmer Reese officially announced “Excellence” as the corporate culture of Packard Electric. Excellence would be the predecessor to the Packard Principles, and would further define the structure and behavioral expectations behind how Packard Electric would operate. Pull-to-seat terminal connections became the new standard of plug and harness design. Expansion also continued with further plant openings in Mexico, Ohio, and Mississippi. New operations and joint ventures began in South Korea as an Asian footprint was established. Facilities in Brazil, Japan, and Australia gave Packard a presence on five continents, and by the end of 1989, Packard Electric was a true worldwide competitor.

TRAILBLAZING TOMORROW - THE ADAPTATION OF EXCELLENCE

Reese officially announced "Excellence" as the cultural philosophy of Packard Electric. The concept was a continuation of the Packard Principles, and was determined by a committee gathered to define the actions that would best capture the idea of Excellence. Excellence would become the standard for conducting all business internally and externally with Packard. Reese appointed William C.

Wehmer the Director of Excellence, who guided Packard Electric’s development of the Excellence concept throughout the remainder of his career. Bill made sure that the Excellence concept was not just another training program, but rather an entirely new way of thinking and approaching business. Bill had previously been instrumental during the development of the Packard Principles, and took the evolution of the concept very seriously. Similar to the Packard Principles, the

Absolutes Of Excellence defined behavioral expectations for every employee in the company.

The Absolutes of Excellence*:

McCart, a manufacturing innovator, implemented a total quality philosophy in the Mississippi Operations. McCart’s convictions to following this philosophy earned him a spot in the Excellence Hall of Fame for his commitment to its principles. 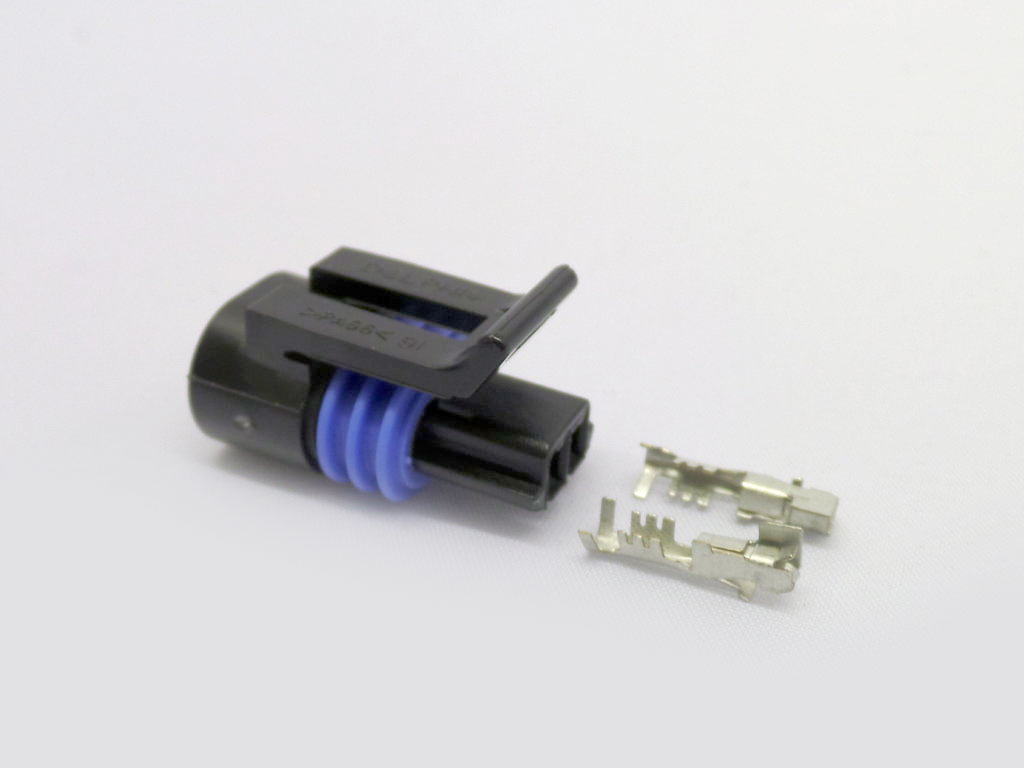 Also in 1985, pull-to-seat terminals solved problems with poor seating. Sealed connectors required a new pull-to-seat assembly process. Pull-to-seat terminals allowed for a new process during terminal construction; in which the wire leads are drawn through the entire terminal before being stripped and having the metal connector end crimped on. Once the metal end had been fastened; the wire was pulled back into the terminal, locking the metal connector end into place with a physical seating. This process was repeated with all remaining wires. A loop over hook terminal body end further promoted a strong connection between male and female terminals.

1986 saw further expansion as Packard opened Plant 51 in Casas Grandes, Mexico, as well as Plants 52 and 57 in Chihuahua, and Plant 55 in Delicias. 1986 was also the year that Packard established a presence in Asia Pacific with the Shinsung Packard Company, a joint venture in South Korea.

Expansion in Europe continued in 1987 with Packard Electric Burgenland GMBH opening in Austria. In Mexico, Packard opened Plant 56, Chihuahua II. Expansion in Asia Pacific continued with a joint venture with Daewoo in Korea. 1987 was also the year that the Global Excellence Training Center was established to offer training in support of Excellence.

Schlais Jr. took leadership of Packard Electric. Rudy was a native of Hubbard, Ohio, and began his career at Packard in 1960. He completed a variety of assignments during his two previous stints at Packard, including Director of Engineering from 1981 until 1984, before returning to the division to succeed Elmer Reese as General Manager on July 1, 1989.

Innovation continued as Packard's patented "Bussing Plate" provided a 118-contact connection system, creating a common circuit. The bussing plate was a multi-piece sandwich style system of electrical routing that used layered plastic plates with printed circuits to connect the desired terminals on a 118 point grid. The plates allowed for both high and low current bussing separations. The plates were applied underneath the main fuse panel of an automotive fuse box; a place with high terminal connection totals and low space for internal wiring.

1989 was also the year that Plant 26 began production in Brookhaven, Mississippi and Plant 27 opened in Clinton, Mississippi. Plant 37, Conductores III, and Plant 85, Sabinas Hidalgo, opened in Mexico, and in Spain, Tarazona began production. Guadalupe II (Plant 84) opened in Guadelupe, Nuevo Leon, Mexico. Sabinas Hidalgo (Plant 85) opened in Sabinas Hidalgo, Nuevo Leon, Mexico, and Packard CTA, a joint venture with Carthew and Travaglini (Pty.) Ltd. in Ararat, Australia, was formed. Packard do Brazil announced a joint venture with Ericsson of Brazil to produce components in Sao Jose Dos Campos, Brazil, and Packard's Asian Technical Center was established in Tokyo, Japan. By the end of 1989, Packard was now operating over 20 different locations on 5 continents with an employee headcount of close to 55,000.