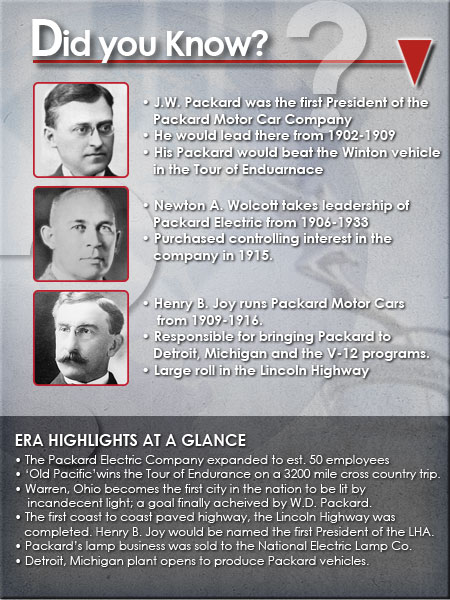 The growth and early success of Packard brought multiple changes to the Warren, Ohio based company. In 1903, the automotive portion of the company was purchased by an investor and moved to Detroit, Michigan were it could thrive alongside of the other large automotive marques. Packard Automotive would continue to prove itself a contender among the established greats and would set multiple records and surpass its rivals through a series of competitions, all while making leaps and bounds in internal and external growth.

Meanwhile, Packard Electric would continue its own product development to create new types of wiring and cables for both auto and commercial use. The lighting division, while sold in 1903, would still allow the city of Warren, OH to become the first U.S. city to be lit entirely by incandescent light, and ultimately formed what became General Electric. While the companies became fiscally separated during this era, they remained closely related. The U.S. automotive industry was experiencing dramatic growth, and Packard Electric intended to fuel that growth by providing the best performing and most innovative electrical systems possible, not only to Packard Vehicles, but others as well.

THE GOLDEN YEARS - PAVING THE ROAD TO VICTORY

Packard Motor Car was built in Warren in 1899 at the Packard Electric Company's subsidiary plant, the New York and Ohio Company. Manufacture of a successful automobile brought about the formation of the Ohio Automobile Company which evolved into the Packard Motor Car Company in 1902. The formation and evolution of the Automotive Company brought about new challenges and opportunities for Packard Electric. The Packard Lac-Kard cable, developed by Packard Electric for Packard automobiles was the first in what would be a long line of electrical system innovations, driven by the increasing number of automobiles in the United States. In 1900, there were 13,824 total cars on the road, and by 1920 the U.S. auto industry was producing over 2.3 million annually.

This massive growth was an opportunity for the brothers to refocus the Electric Company and position it as a world leading automotive supplier. To that end, the Packard brothers sold the

lamp division of Packard Electric to the National Electric Lamp Company in 1903, which was later acquired by Edison Electric (soon after General Electric) in 1909, however, Packard labeling could be found on bulbs as late as 1925. In 1903 they also sold Packard Automotive to a group of Michigan investors who moved 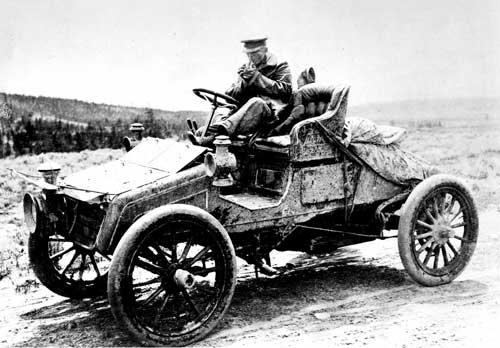 Model F. One of these Model Fs, dubbed the ‘Old Pacific’, made the first transcontinental journey from San Francisco to New York City in May of 1903. Designed to showcase Packard’s industry leading quality and durability, the Old Pacific was the first (of three other cars made by different auto manufacturers) to complete the trip, 63 and a half days later. 1903 also marked the first year that Packard automobiles were equipped with a dual-cylinder engine, compare to the industry standard of a single cylinder.

In 1906, J.W. Packard stepped down as Packard Electric President, turning over the position to a fellow Lehigh alumnus, Newton A. Wolcott. Ten years later, the Packard brothers would sell the company to a group of investors led by Wolcott. Despite his departure from leading the company, James continued to lead the electrification movement in his hometown, eventually leading to another first for Warren, Ohio. In 1911, Warren became the first city in the United States to

light its streets with all incandescent light bulbs. 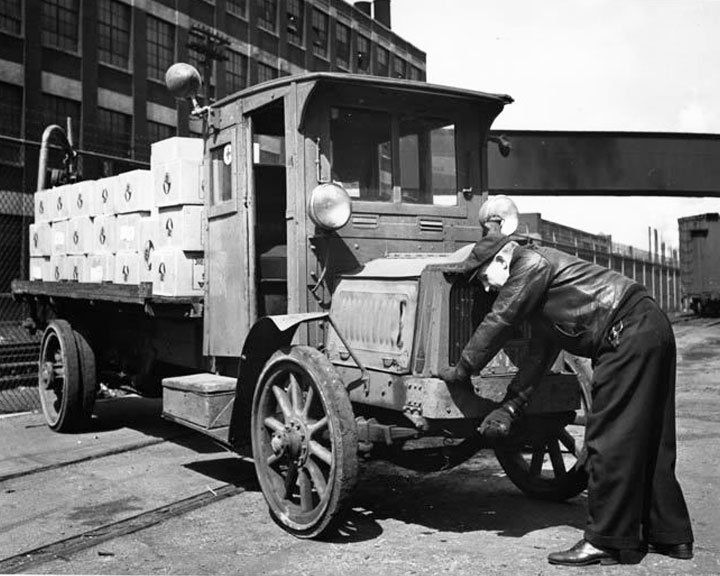 In 1912, a Packard truck carrying a three ton load traveled from New York City to San Francisco over the period of 16 days. Much like the journey of the Old Pacific, this journey was an endurance challenge designed to showcase the durability of Packard vehicles. This durability would be needed to supply the forthcoming wartime effort brought about by World War 1. This journey was also aided by the ongoing construction of the

Lincoln Highway, America’s first stone paved coast-to-coast road. The completion of the highway was a milestone in not only American history, but Packard’s as well, as the Packard Automobile’s president at the time, Henry B. Joy, was also the President of the Lincoln Highway association, and was instrumental in its formation.

While Packard Automotive prepared for the forthcoming war effort, Packard Electric did the same with the creation of acid proof cable in 1909 and

Packard Jr. Cable in 1913, which had a lower grade core and coating to reduce costs and free up additional resources for the impending conflict. As war loomed on the horizon, the Packard brothers were getting older (49 and 51). At the time, the average lifespan of the American male was 50, and the brothers were hoping to leave the company in good hands before retiring to spend more time with friends and family. In 1915, they turned control of the company over to long-time friend and Lehigh alumni, Newton A. Wolcott.