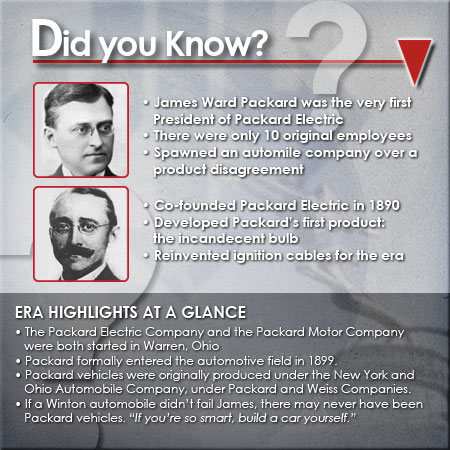 After leaving Sawyer Mann Electric in the late 1880s, the Packard brothers leveraged their college training and business experience towards the establishment of the Packard Electric Company in 1890, the year Warren, Ohio entered into the “age of electricity”. Their first product line, electric light bulbs, were used to transform Warren into the first city in the nation with all electric street lights. In 1899 the first Packard Motor Car was built in Warren at the Packard Electric Company's subsidiary plant, the New York and Ohio Company. Manufacture of a successful automobile brought about the formation of the

Ohio Automobile Company which evolved into the Packard Motor Car Company in 1902. The birth of the Packard Motor Car company began when the brothers traveled to Cleveland Ohio in 1898 to purchase a brand new Winton Automobile. On the 70 mile drive home, the car broke down due to electrical failure. When the brothers confronted the President of Winton Automotive, he replied, "if you think you can build a better car, then why don't you try!", and so they did.

CREATING AN EMPIRE - THE RISE OF PACKARD

Packard Electric had its beginning in June, 1890, when the two Packard brothers, James Ward and William Doud, built a plant on North Avenue in Warren Ohio to make electric lamps. The plant was a small frame building, with ten employees. 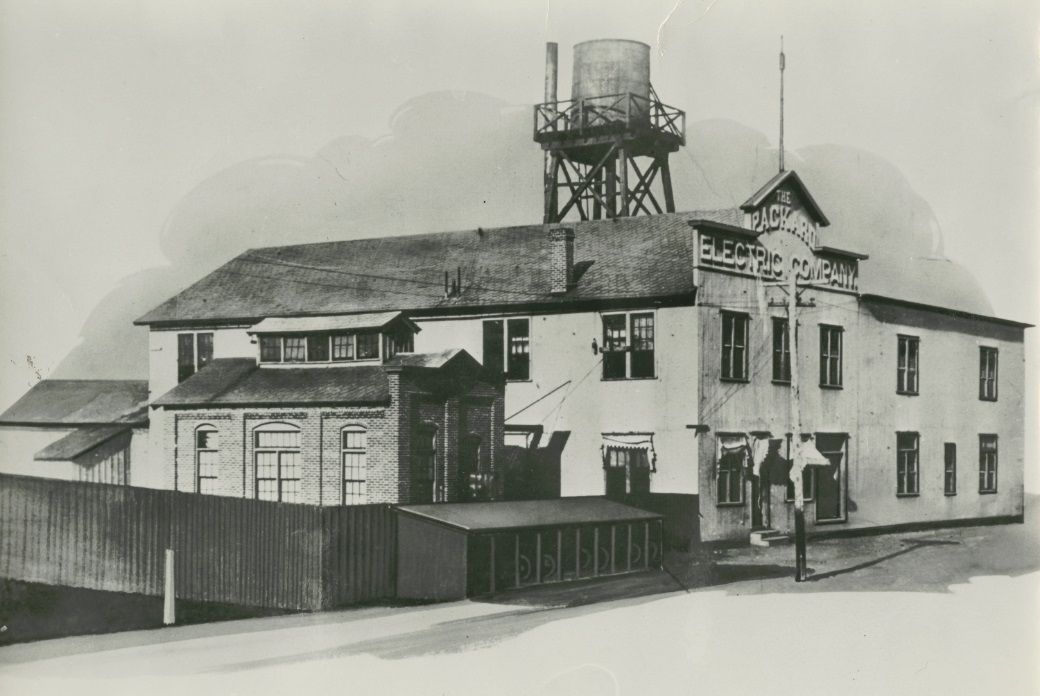 Incorporation papers were signed with James Ward Packard as general superintendent and William Doud Packard as the secretary and treasurer. James being the innovator of the two, focused the majority of his work around product development and electrical research. His first products championed the refinement of incandescent light bulb technology. These would include revised construction process, socketing, and the use of a chemically treated bamboo filament that gave the Packard designed bulb a longer product life than the current competition. These bulbs were produced by Packard subsidiary, the New York & Ohio Company. In an interesting twist, there was debate on whether or not Thomas Edison’s light bulb infringed on the brothers’ patented process, first pioneered during their days at Sawyer Mann Electric. The debate ended in 1909 when Edison’s lighting company bought Sawyer Mann and Packard’s lighting division to form General Electric. Light bulbs continued to be made at the Warren Lamp plant through 2014. 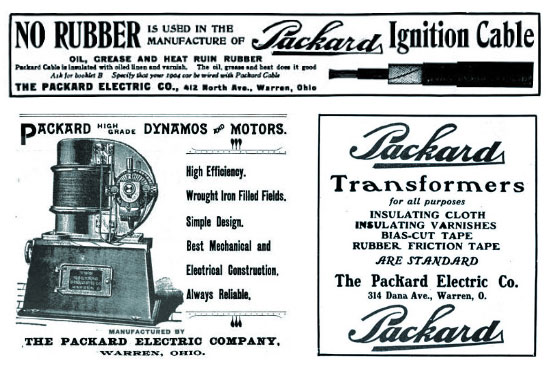 In 1896, Packard added electrical transformers as a second product line, and James Ward Packard's interest in the "horseless carriages" led him to buy a gasoline powered tricycle from France, which, two years later, led him to purchase an early American automobile made in Cleveland.

In 1898, James Ward Packard purchased his first automobile for $1000.00, a single cylinder Winton, built in nearby Cleveland, Ohio. Driving home from Cleveland, the Winton broke down, and the car had to be towed into Warren by a team of horses. The notes in his diary were brief: “Went to Cleve came down in new motor carriage – hard trip, towed in. Winton carriage balance paid $800.00.” Growing tired of listening to James’s complaints about the car’s flaws, Winton company founder Alexander Winton told Packard that if he knew so much, he should try building a better car himself. Winton should have known better than to challenge J.W. Packard. James certainly had the knowledge and means to build a better car. James Ward Packard was a mechanical genius who had earned a degree in engineering from Lehigh University and had had obtained several patents even before founding the Packard Electric Company with his Brother. Armed with knowledge and experience, the brothers convinced wealthy Winton investor,

George Weiss to join them in the automobile business. 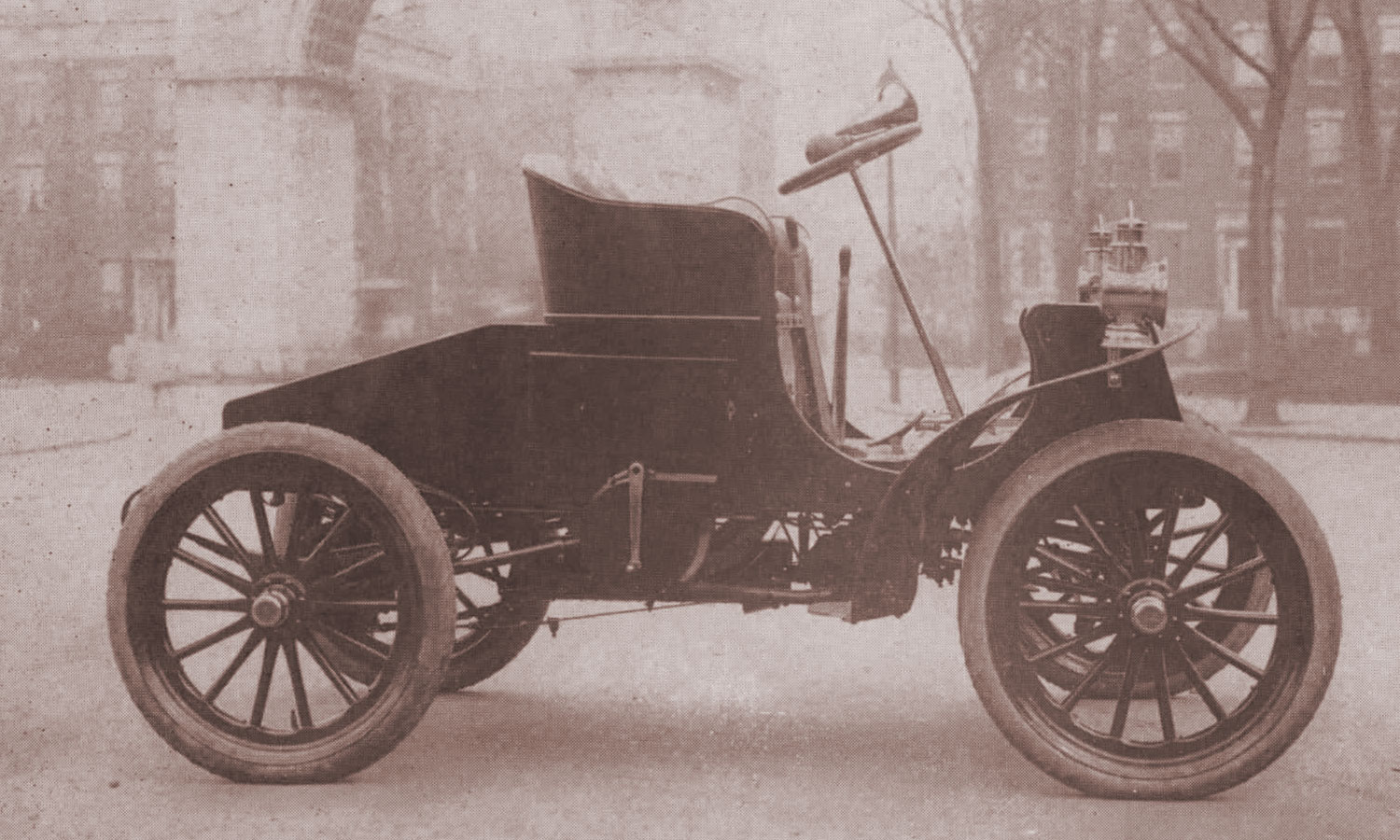 The first Packard automobile was built in a corner of Packard Electric’s New York & Ohio lamp plant on North Street (now Dana Street) and rolled out onto the streets of Warren, Ohio on November 6, 1899. From the very beginning, Packard built luxury vehicles for an exclusive clientele. William D. Rockefeller was so impressed by the Packard Automobiles exhibited at the first National Automobile Show in New York City in 1900 that he

One of the many vexing problems confronting U.S. automobile manufacturers at the time was that of electric wiring. Suitable cable for the high tension circuit were not available in this country, and only limited quantities of an inferior grade could be had from Italy and France. The brothers capitalized on this opportunity and set about developing a cable suitable for not only Packard automobiles, but other auto manufacturers as well. This led to the development of the

Packard Lac-Kard Cable in 1901. An early issue with pre-Packard ignition cables was the presence of Corona; an ozone gas that is emitted when power is fed through a cable or wire. Corona would quickly deteriorate the rubberized insulation found on early spark plug wires. When that happened, cracking or separation persisted, and the wires would ‘leak’ electricity in the form of arcing. This leaking caused greatly reduced engine power. Packard developed machines early on to test for Corona levels and assess the damaging effects. The birth of the Lac-Kard cable meant the use of treating the rubber insulation on the wires with a lacquer coating until they were saturated and sealed from the corrosive ozone gas. Doing so prevented the failures found in early ignition sets. This quickly became an industry standard.

Eventually, the brothers sold the Packard Motor Car Company to Michigan investors, led by Henry Joy Jr., who moved car production to Detroit. This allowed them to focus on what had quickly become the largest and most profitable division of Packard, electrical systems.